An Oldie But a Goodie 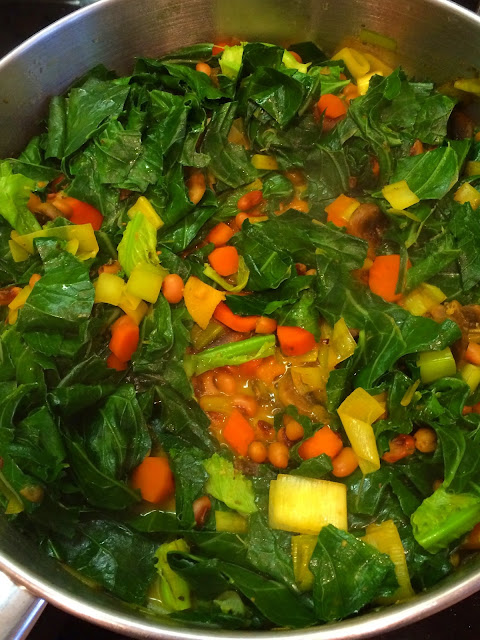 You know I can never get enough greens.  Inspired originally by a post on the wonderful blog {Plate+Simple} (no longer active, but you may be able to find archives), I've made so many versions of these sweet curried collards using whatever I have on hand.  This time I started with coconut oil, a leek, three organic carrots, several mushrooms, and a can of black eyed peas, rinsed well.  To these veggies I added a couple of shakes of turmeric powder, a shake of allspice, a pinch of salt, a few shakes of nutritional yeast and a couple shakes of dried oregano.  Once the carrots had softened, I added chopped collard greens, turned up the heat to medium high and added a couple of shakes of tamari and a generous splash of orange juice.  I stirred it all up, popped a lid on it and turned the heat back down, leaving the covered pan on the hot burner for a couple of minutes.  That's it!  I Love, love, love a recipe with no measurements.  It's so much more fun to cook that way!  I cannot say enough good things about this combination of flavors!
Posted by Cheryl Allen Salinas at 12:13 PM No comments:

A New Kind of Greek Salad 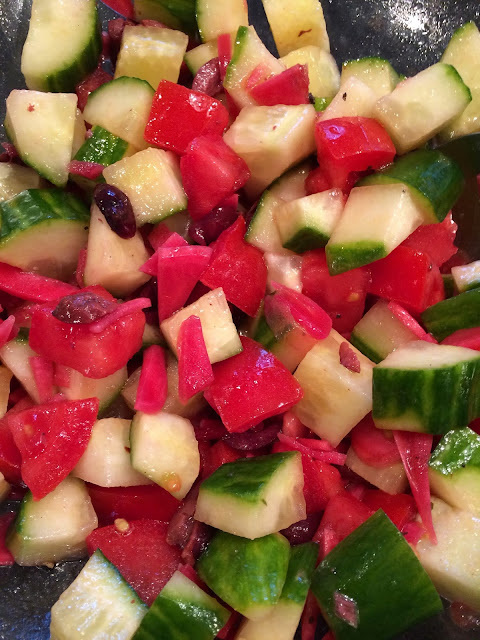 Many years ago, while I was still in college, my family and I spent a couple of months in Greece over the summer.  It wasn't intended to be such a long stay, but there was a highjacking a couple of days after our arrival and U.S. airlines had stopped flying to Athens.  Eventually, since we had to go back to school, we boarded a freighter ship to Ancona, Italy, and enjoyed a few bonus days driving around that gorgeous country before flying home from Rome.  It was a memorable summer, to say the least.  But I digress . . .

Greece:  our time in this seat of global culture was highlighted by fellowship with several amazing people. A Greek friend from school was an amazing host/tour guide in Athens and at his family's home on Mykonos.  Living with the locals cannot be beat for a cultural immersion experience. My Dad's co-worker and his family were also amazing hosts, in and around Athens and also at his grandma's house in the tiny town of Leonidion (I'm not sure how to spell it in English) up in the mountains at the end of the road. In Greece, foods are served in a very unadulterated way -- close to their original forms.  Preparing food is more a pairing of flavors than a transformation.  With fresh ingredients, that's the best way.  Whatever we were eating, the greek salad was ubiquitous.  It was never discussed, we just all pitched in and started chopping -- every day.  In Greece, the salad always starts with tomatoes, cucumbers and feta cheese with olive oil.  There were black olives sometimes, herbs sometimes, bell peppers sometimes, but always cukes, tomatoes and feta.

As our weather begins to warm, I find myself wanting fresher flavors. Since I'm not eating cheese, I got a little creative with replicating that Greek salad tanginess.  The kalamata olives (not a favorite of  my current family but I love 'em) contributed so much toward the tanginess goal, but since I used a bit of restraint for the sake of the fam, I had to find another tang source without the pungency of the olives.  I decided to open a recent jar of pickles I made:  radish and purple onion.  Nothing gets wasted round here, so when I finished the purple cabbage kraut I had bought at the store, I repurposed the pretty brine for the pickles, adding a bit of purified water and a few drops of ume plum vinegar.  The resulting pickle concoction was just what I needed to round out my newfangled Greek salad. The salad was delicious and effectively transported me, temporarily, back to a lovely memory.

Posted by Cheryl Allen Salinas at 1:27 PM No comments: 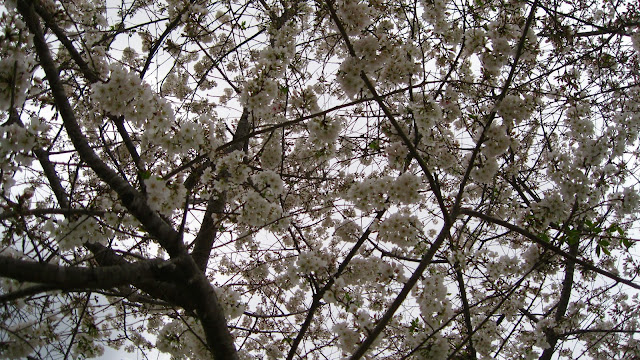 Bits of our Spring have sprung, such as my cherry blossoms here, but other bleary-eyed plants are only just beginning to wake.  On this overcast day, I enjoyed capturing some of my backyard paradise in photos. 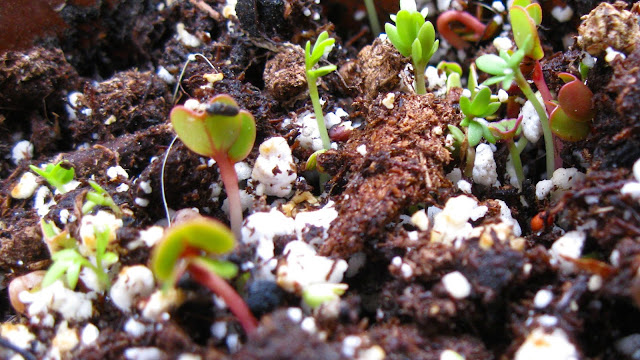 On my way outside, I snuck up on these little microgreens I have growing in a pot in my screened porch.  Aren't they darling?  I can't wait to gobble them up. 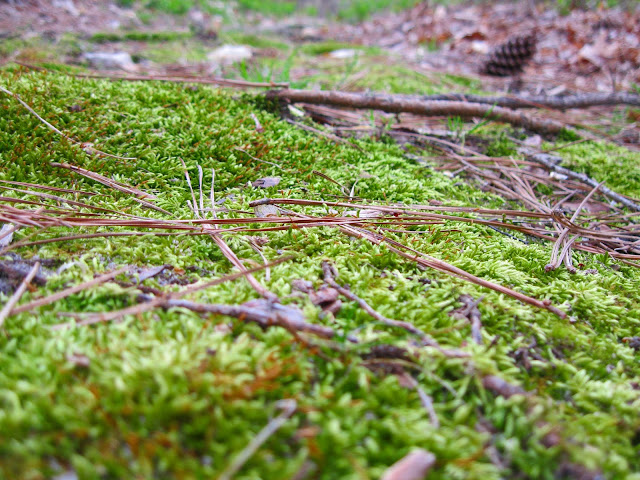 My woodland path is basically carpeted this year with this lovely moss!  Can't you just see fairies and wood nymphs gamboling across the plush surface?  Yes, I was down on my belly in the woods to experience this fairy vantage point. 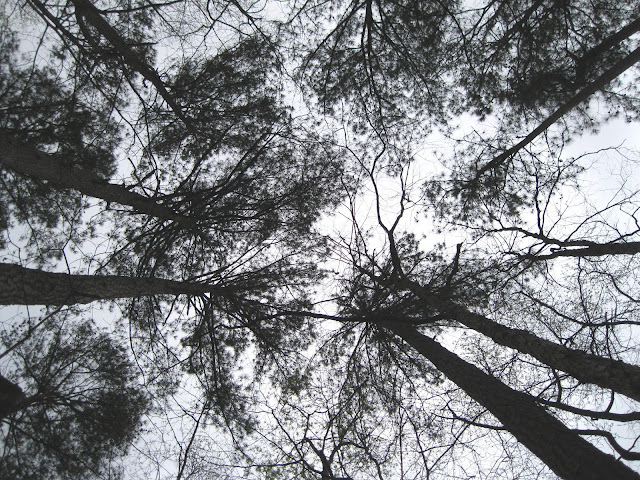 Halfway down the hill to the creek, I looked up.  I always wish I could put on a raincoat and boots and hang out at the creek during a storm to see how it is transformed, but these scary titans really move in the wind, leaving chunks of themselves on the woodland floor. 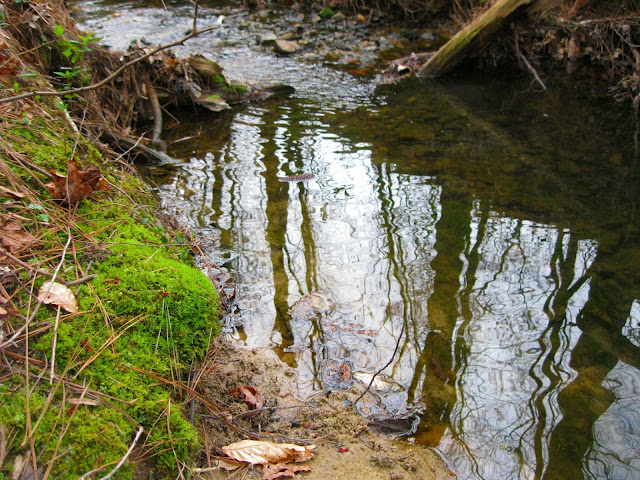 Lilliputian greenery has a head start on other emerging flora down by the creek too.  Looking up or looking down, it's my favorite time of year.

Posted by Cheryl Allen Salinas at 5:42 PM No comments: 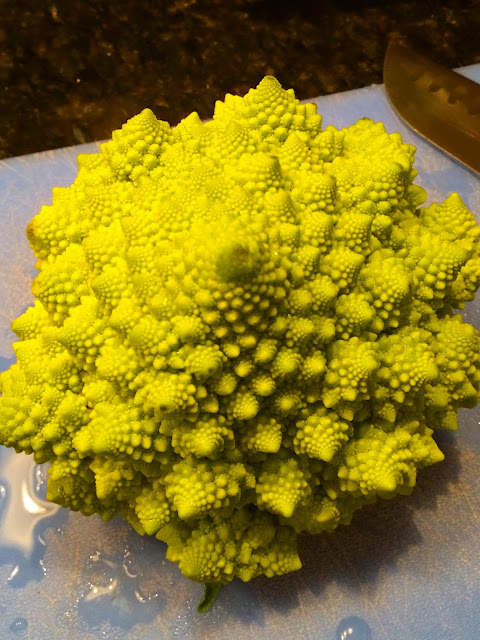 Have you ever seen one of these?  I think it's some sort of Tuscan Cauliflower.  Staring too closely at the kaleidoscopic, psychedelic whorls of this symphony of fractals made me a teeny bit dizzy.  Still, I think it's beautiful.  Blanched and roasted whole with a little olive oil, salt and pepper, I found the flavor to be slightly tastier than a white cauliflower.  I turned the leftovers into an amazing, creamy soup with sauteed onions, broth, a little coconut milk, cumin, cinnamon and chipotle powder.  I just whirled it all up in the Vitamix. Delish!
Posted by Cheryl Allen Salinas at 7:01 PM No comments: