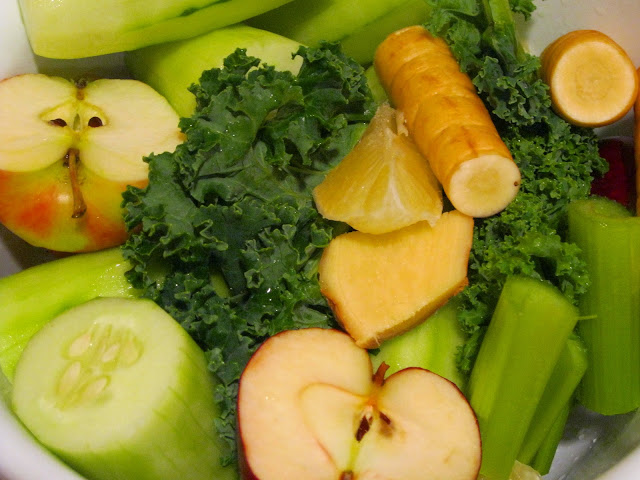 Dad's here for a visit! We all love it when he comes.

The dogs quietly go to the front window when they hear the sound of his car's engine rounding the corner. The sound of the car is imperceptible to humans at the point they notice it, but within a minute or two he is pulling into the driveway, and they each, still not barking but smiling and wagging, compete to be the first one to put her nose through the door as I open it to welcome him. Unlike every other time the beasts slip out the front door, they do not go on a joy run throughout the neighborhood for me to chase, sweating and panting with leash in one hand and box of treats in the other. No, when Dad is here, the girls only walk out onto the front stoop to encircle Dad's legs, smiling up at him adoringly. They continue to follow him into the house, Pied Piper that he is. Still, neither has uttered a woof.

"Some guard dogs you are!" Dad says by way of greeting.

The girls love Grandad! He spoils them rotten as a grandparent should.

Look at the lovely fodder for juice in the photo above! I made a couple of good batches the last two mornings. Dad saw the broken nozzle on my fabulous juicer (see Lazy Food Season + An Island Mystery for the backstory) and before I knew it, he -- puttering on his little travel computer at the kitchen table -- he'd ordered me the replacement part. Dad's awesome!

Look what else Dad found for me: 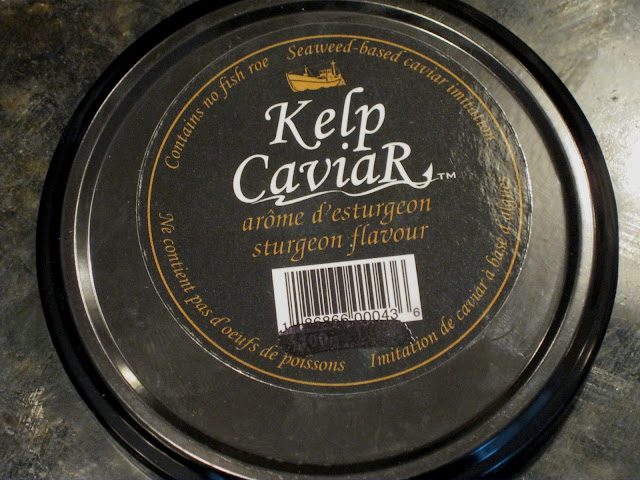 Isn't this cool -- this caviar is vegetarian -- made from seaweed! It is delicious and very like the taste and texture of real caviar, only a little less salty. 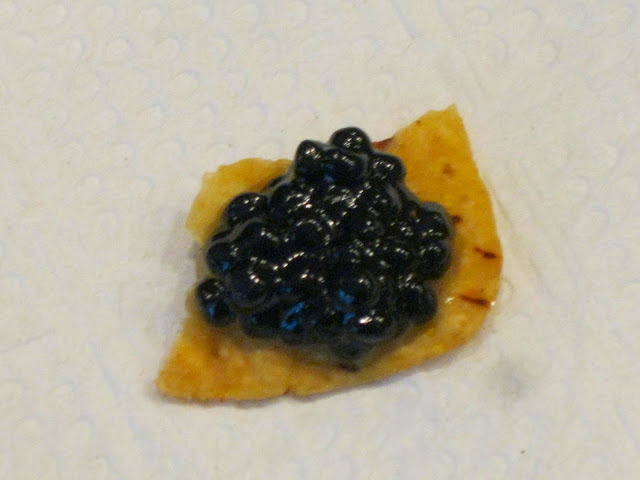 Dad got me this sturgeon flavor variety, and also salmon roe flavor. Mmmmm! 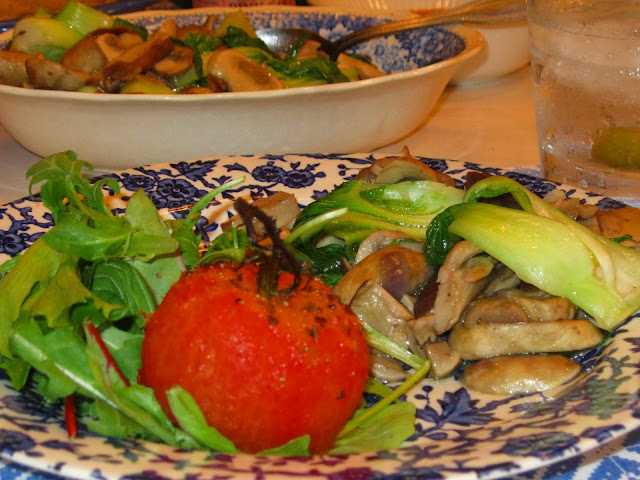 I've been such a lazy vegan of late. Led by life's demands rather than charting my own course, I've been thankful for my "tried and true"combos which keep me reasonably balanced and healthy -- the greens, beans and grains, and fresh vegetables prepared simply. Though luscious and fresh, sometimes too much of the same can become tired. Recently, I noticed nothing really appealed. Then I remembered I had received a couple of beautiful cookbooks as Christmas presents which I'd only begun to explore. What I needed was inspiration -- exposure to new ideas!

Time is still short, but flipping through the cookbooks, I found something I wanted to eat -- Semi-Dried Tomatoes from Crazy Sexy Kitchen by Kris Carr and Chad Sarno [check it out on Amazon]. The extra step of peeling the tomatoes was worth the effort as the exposed tomato flesh allowed the flavor of the herbs, spices and olive oil to permeate the fruit, resulting in a lovely and different flavor and texture.  This semi-dried tomato complimented and brightened all the flavors on the plate -- in this case sauteed baby bok choy and mushrooms and fresh baby greens. Dressing for the greens was not necessary -- the semi-dried tomato was very juicy and luscious.

Remembering my wonderful gifts, I am inspired, and look forward to the next -- from Simple Vegan! by Good Housekeeping [check it on Amazon as well]. This book was a gift from my amazing friend, Linda, at work. The book has a spiral binding -- such a practical bonus.  No delicious vegan ingredients from my sloppy fingers on its pages as I struggle to keep my place! This one lays flat. I will share future creations.
Posted by Cheryl Allen Salinas at 10:27 AM 1 comment:

It IS Easy Being Green! 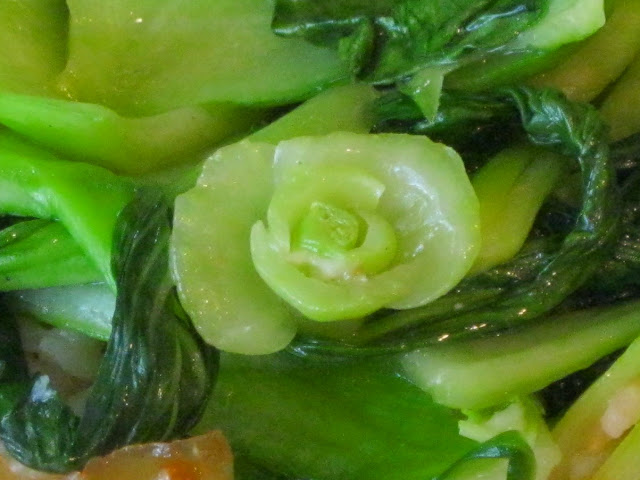 Apologies to Kermit, beloved amphibian from an earlier chapter rife with nostalgia -- I have found that it is in fact easier to be green than not to be green. "Being Green" means different things to different people of course, and we each can participate in the green movement to the degree that we are able or motivated. Personally, I do recycle and repurpose in most aspects of life, but that's not the focus of my post today.

Today, my 3rd Veganniversary, I want to talk about what I eat! Will you look at that lovely Garlic Baby Bok Choy rosette? Opening the little carton today I was happy to see this example of the randomly chopped fresh greens, prepared simply and deliciously. This little flower was right on top, requiring no further food styling on my part. This would be easy enough to make at home, but baby bok choy is very different in flavor than the adult version of same (a higher green-white ratio) and isn't always easy to find in the grocery store. Sometimes on a Sunday I stay in my pajamas if the weather's gloomy, so the $8 for the jam-packed carton of decadent greens which will last me two or three meals seems a small price for such an indulgence!

The greener, the easier, actually. By that I mean all aspects of life seem to go more peacefully and smoothly the more greens are incorporated into the diet. If I don't have dark leafies at least twice a day, I am out of sorts. If I include lightly cooked greens at three meals per day for a few days in a row, I actually get a bit closer to attaining ascended master status. Just kidding -- but I do feel much more zen, regardless of outward circumstance.

Yes, today is the third anniversary of my abrupt decision to cease eating creatures and their secretions. For those unfamiliar with my story, a quick disclaimer: At about 18 months vegan I began eating sea creatures on the rare occasion. Folks like to put a label on things, so the best I can come up with for myself is Vegan+. Pescetarian doesn't fit since I eat no dairy, and seafood is a rare indulgence. Most of what I eat is plants.  To commemorate three years vegan(+), I'd like to share with you one of my favorite new kitchen standbys -- Green Soup! 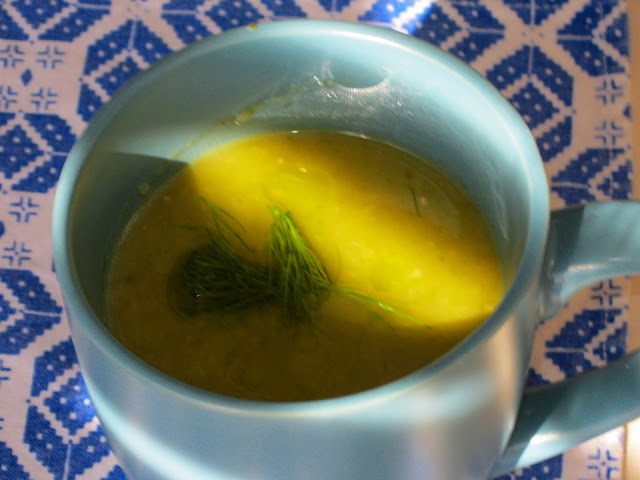 This is not an original creation, so I'd like to give credit where it is due. About a month ago I was driving home from visiting a friend who lives in the next county, so I was listening to National Public Radio, a show called "The Splendid Table". I did not catch the guest's name, since I tuned in too late, but I thoroughly enjoyed the episode. The cook spoke of how she stayed cozy (cosy, actually, since she sounded British) and well throughout the long, cold winter. She always had a pot of green soup in her larder. This soup can be made with whatever greens you have on hand. The chef's favorite "triumvirate" as she deemed them, were Swiss chard, kale and spinach. She used a large bunch of each.

The soup begins with sliced onions, slowly cooked in olive oil, over a period of time until caramelized. The chef urged the green soup creator not to be in a hurry during this part of the soup making, keeping the onions simmering on a medium-low heat for quite some time while other home nesting tasks are handled. As the perfume of the sweet, translucent onions permeates your snug winter cabin, you can begin pulling the tender parts of the greens away from any woody stalks. The stalks of chard will soften enough to be used, but not those of kale or collards.

Fill the oniony pot with distilled or filtered water. You may opt to use a tiny bit of broth if you like, but it is not necessary. There will be plenty of flavor from the veggies. Gently simmer the greens in the liquid until they are soft. I do not care for my greens "cooked to death" so as soon as they are soft enough, I turn off the heat. The cook on "The Splendid Table" finally shared her secret ingredient -- half a cup of arborio rice cooked in the soup. It is the rice which, blended into the vegetables at the end with an immersion blender, imparts a silky, creamy texture, with no dairy!! I eat brown rice instead, and there is always a potful already cooked in my fridge, so I just throw some of that in at the end instead of cooking it with the veggies. Cooking rice takes longer than I want my greens to cook anyway, so this shortcut works for me. My own contributions to this lovely creation are: a pinch of dried garlic, a grind of pink Himalayan salt, a grind of white pepper and a little splash of sherry for the whole pot.

I remembered I had an unused immersion blender I'd received as a wedding present oh, so many moons ago. I remember thinking in my youthful oblivion, "why do I need this when I already have a perfectly good blender?" Now I know why I need it. Pouring a boiling liquid back and forth from pot to blender to pot will result in a nasty scalding. So will using the immersion blender  in a pot that's too shallow, as I found out the hard way. With the money I saved remembering that decades-old immersion blender stowed in my top cabinet, I treated myself to a new, taller soup pot for my next batch of green soup. It did the trick.

The inspiring chef guest on "The Splendid Table" wrapped up her presentation by suggesting we honor the lovely green soup for what it is -- a gift to ourselves. As such, after ladling into bowls, a tiny drizzle of high-quality extra virgin olive oil is gorgeous on top and rounds out the flavors, complimenting the satiny texture. A squirt of fresh lemon adds an element of sunshine, which goes beautifully with some tender, fresh herbs, uncooked, just floated on top. I've been on a bit of a dill bender lately -- cannot get enough of the stuff -- so yum.

Other versions of this soup in my kitchen have included leftovers like green beans, Brussels sprouts, cabbage and broccoli, but I always like to include plenty of fresh kale too!

Be good to yourself. It is easy and decadent being green!
Posted by Cheryl Allen Salinas at 5:31 PM 4 comments: